The layout of the garden prolongs the pleasure of the visit

It’s a nice building under the road. I also passed in front of him before doing a small careful U-turn. It is hard to imagine that here we find a whole part of the city’s history, a bit of what made Barr great, at a time when it was a powerful city and even a counterweight to Strasbourg. If Obernai is the center of attraction today, in the 18e century, it was in Barr that the booming economy attracted dozens of tannersas well as livestock breeders (for leather), and therefore a certain number of butchers.

When Clémentine welcomes you with her big smile and mischievous eyes, she better tell you about her work that has been done here since 2003.”It is a building that was inhabited somewhat like an attic, with only one door, no opening. We wanted to open it to the outside, while keeping some elements, such as part of the original wall or the 22-meter-long beams, in one piece. It’s amazing what they could do then.” The time is 1750, the oldest date discovered in the archives, although it is likely that some other mill or building was in use before that. Not much remains of the mill, its wheel and its original configuration. Clémentine and her husband Bernard retained access to a small stream, the Kirneck, a tributary of the Andlau, whose lime-free water made tanners’ golden hours in the 18th centurye century. “First there was a flour mill“, specifies Clémentine, who has not lost her dictatorial tone as a former teacher.Then, from 1810 to 1848, it was turned into a mill for dyeing wood. The wood was imported from Mexico to make the paint.“A craft that has now disappeared, although the Haas tanneries, not far away, remain the last witness of this era. 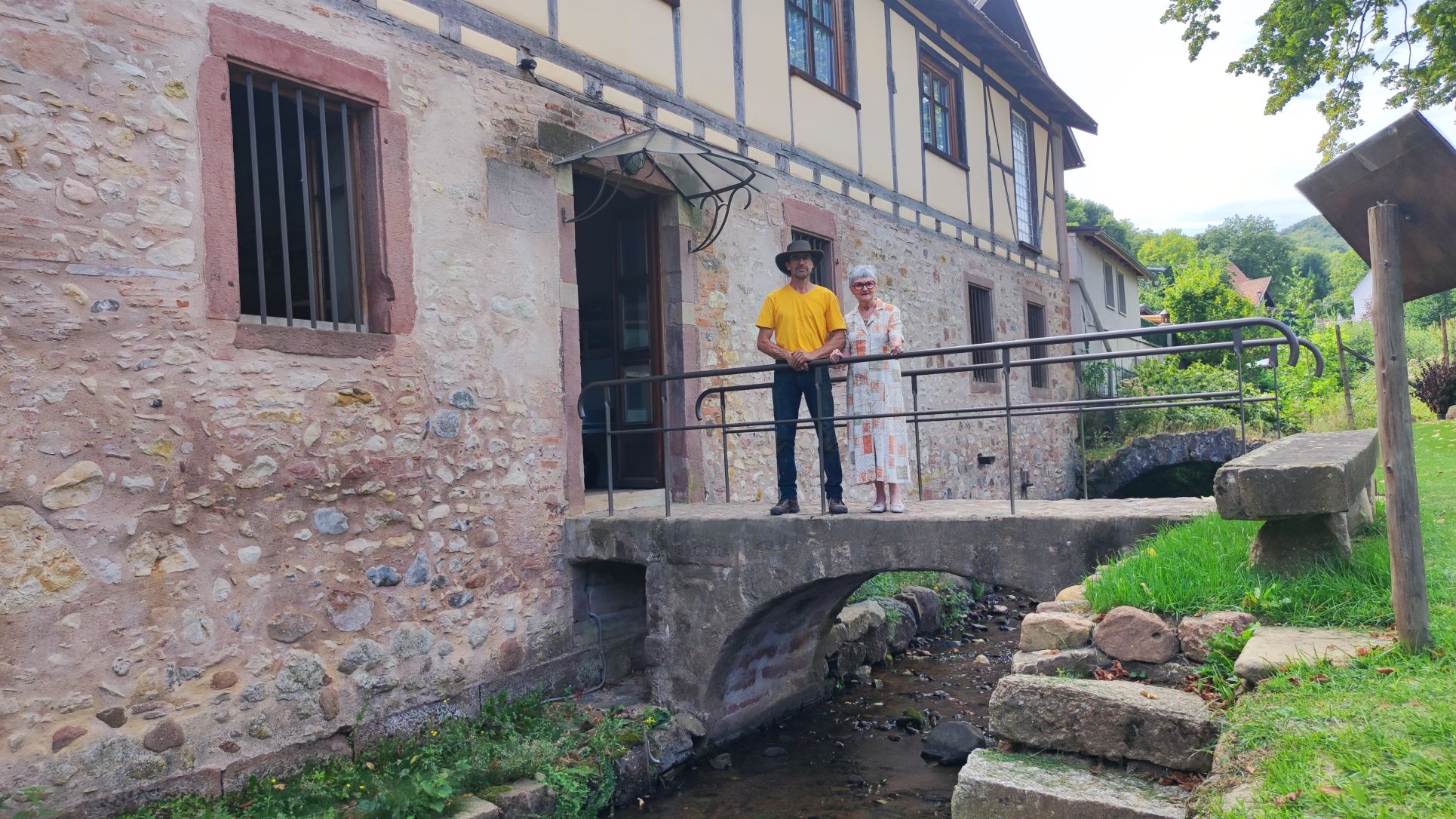 Bernard, a former printer, was not a special craftsman. Yet he is the one who has undertook the construction of a small bridge, using yesterday’s methods, respect the place and its history. It allows you to cross the stream and access its French Multi-Culture Garden. The lawn is immaculate, the irrigation smart, and depending on the season you’ll find tomatoes, potatoes, cabbage, raspberries, watermelons, melons, blackberries, Mirabelle plums, figs, beans, shallots, leeks, turnips (etc. x10). Everything is thought out, and Bernard likes to give valuable advice to visitors : “It is interesting to put lavender to attract pollinating insects.” With his vegetable garden allowing him to be self-sufficient, he enjoys testing and harvesting his own seeds – that he sometimes offers to the most passionate. However, if the vegetable garden takes up most of his time today, he does not forget a few figures: “We still brought 600 tons of drywall in the front and 400 tons in the back. For the construction of the bridge we brought 150 sandstone blocks ! And there, in front of you, I have 250m² vegetable garden, with decor that changes three times a year. Sometimes dahlias, poppies. For this fall, I put it 335 ornamental cabbage.”

They will reveal all this during the European Heritage Day, but also during the rest of the year. The visit is free, because Clémentina’s happiness “just sharingWe share, without the slightest thought, the value that is inscribed in our heritage, and which must also be preserved. 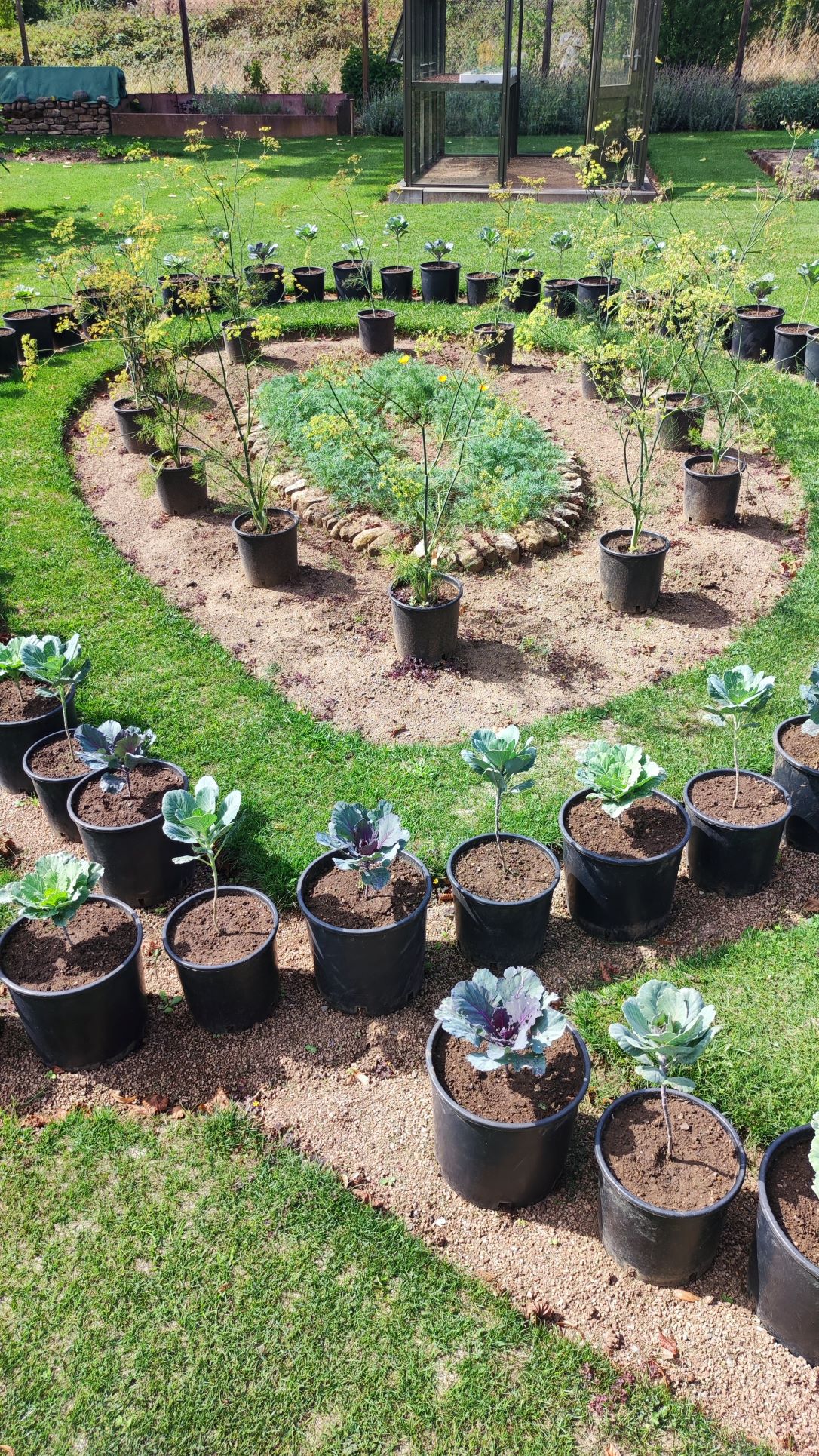 Decoration that changes with the seasons. / @Top Music – SR