Are we starting to feel cramped at home but don’t want to move? And above all, with real estate overheating, we may not have the funds! The obvious solution: maximize all the space you have to give the impression of grandeur.

“That’s what I do every day, using every available cubic centimeter. This includes walls, which can accommodate floor-to-ceiling shelves, and bed bases with drawers,” says Patrick Robichaud, head decorator for Clairoux’s Prêt à vivre brand.

In downtown Montreal, where most of its buyers are located, the median square footage of apartments built from 2015 to 2018 is about 620 square feet.2 (58 m2 ), and decreases! It is smaller than a badminton court. According to data collected by JLR, an Equifax company, the area of ​​residential buildings in Montreal decreased by more than 25% between 2000 and 2018. 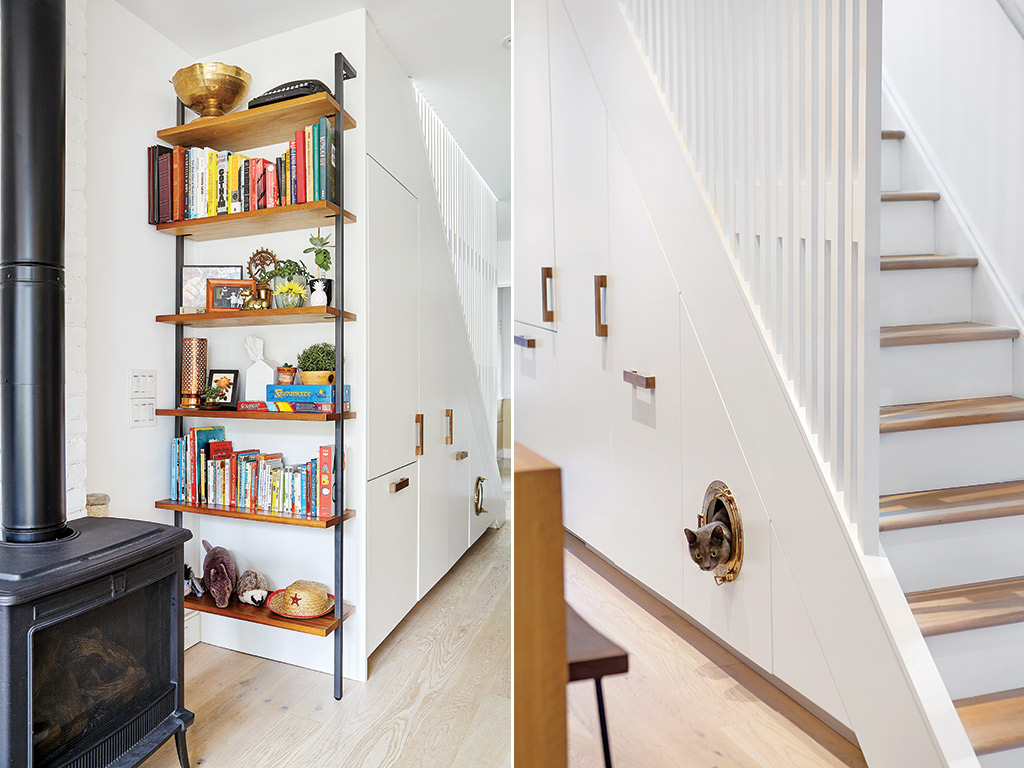 Cat poop is hidden under the stairs. Photo: Ashley Capp

Charisma Panchapakesan and Brian Hagood are happy to own 1,100 square feet.2. Parents of two children aged two and four, architects working at home, cat Sadie always by their side.

In order to give the illusion of space, they knew how to be creative: while open-plan apartments are in trend, the couple decided to build a low wall between the entrance hall and the rest of the house and another between the dining room. and the kitchen. So they furnished rooms with different personalities, while integrating more storage space.

A wise decision, according to interior designer Jessica Locas. She herself often decides to partition the entrance for her clients to make it a more functional place, where you can sit down, hang your coat and put away your shoes upon entering. “Everyone wants open spaces, but we end up sitting in the living room, looking at our boots lying in the hallway and dirty dishes on the counter. It feels like we’re always living in the same room,” she says. So how do you avoid shrinking rooms with partitions? “To maintain the feeling of openness, while creating small divisions, we use glass partitions, for example, half walls or even bookshelves,” says owner Jessica Locas Design.

For small spaces, she prefers neutral and light tones, but not limiting herself to white – as Charisma and Brian did. “Contrasts emphasize the dimensions of the room. So, by applying a darker shade to the back wall of the bedroom, we increase its depth. » 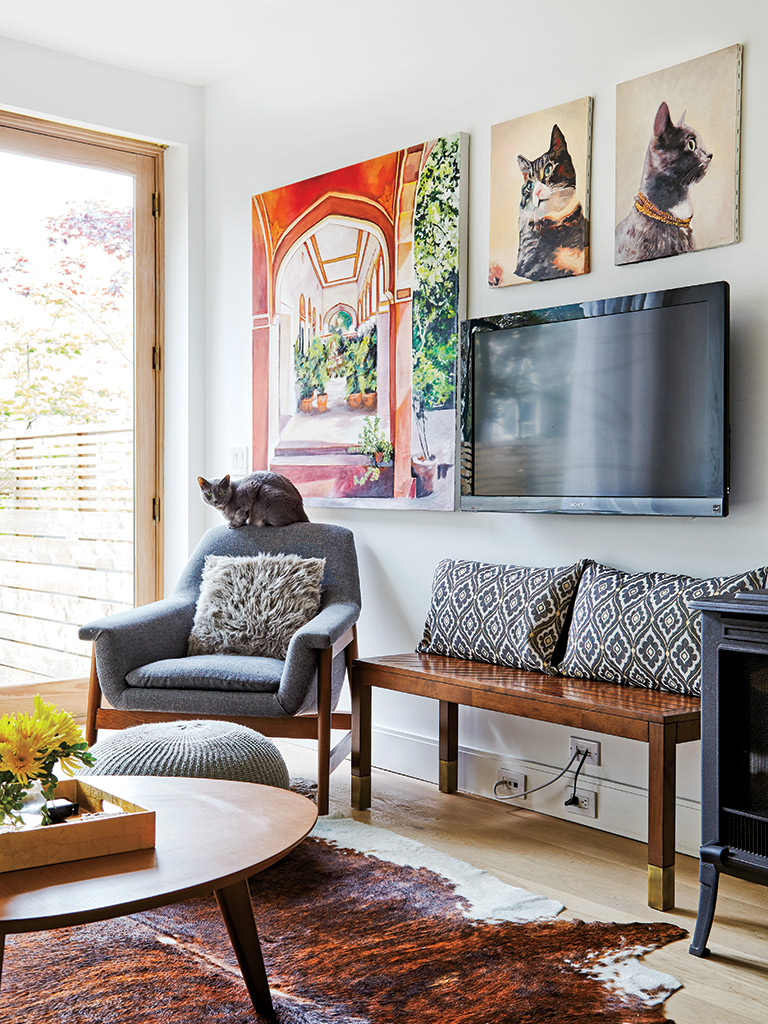 Let the light in by cleaning the windows. Photo: Ashley Capp

Light plays a key role in the perception of a place, according to interior designer Cyrille Maurice, president of 101 Design. “In a bright room, the corners of the walls are no longer noticeable, they don’t catch the eye. So you have to let in as much light as possible,” he says.

To do this, he advises to clean the windows of everything that interferes with the sun’s rays, replace too thick curtains with a light canvas or veil, especially.

To improve the brightness of their home, Charisma Panchapakesan and Brian Hagood even installed a skylight. They also raised the ceiling in their bedroom. This trick gives the illusion of larger rooms. “As soon as you enter a place, the eye looks for the longest diagonal it can find. This is what makes us say whether it is big or small,” explains Cyrille Maurice.

Obviously, when space is limited, good organization is essential. That’s why Charisma and Brian used every corner. The volume under the stairs allowed them to install a cabinet, a second refrigerator, as well as a carrier for their cat.

They also integrated built-in wardrobes in all bedrooms for storing toys and clothes. “Made-to-measure furniture has the advantage of being the right size and perfectly adapted to the surface and purpose,” emphasizes Cyrille Maurice. 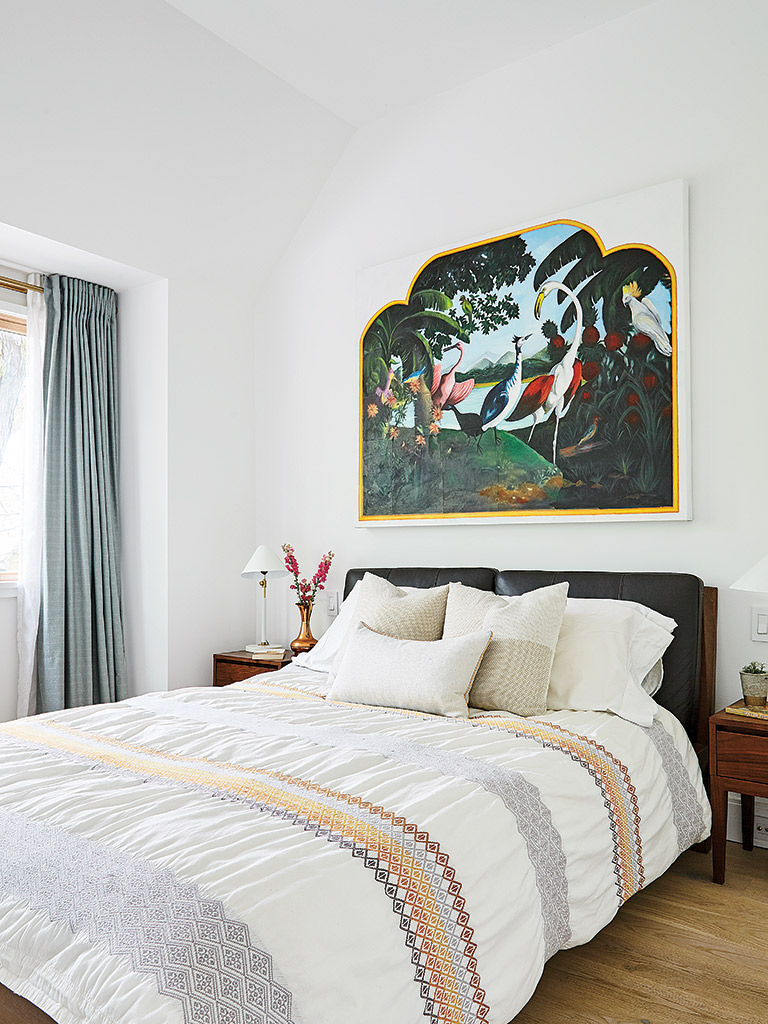 Be careful though: a hyper-organized home can quickly take on the austere look of a hotel suite. So how to preserve its warm character? “You shouldn’t be afraid to include personal details, such as plants, trinkets, photos or beautiful objects that you love and look like you,” says Jessica Locas.

That’s what Charisma and Brian did. Their abode is full of metal details that add warmth and color to their decor, such as brushed gold faucets, a brass boat hatch that doubles as a door for Sadie’s litter box, or the couch in the living room, built into a paneled alcove. gold leaves.

Many elements are also reminiscent of Charisma’s South Asian origins, such as certain textiles, artworks or northern Indian landscapes that she digitized and then printed on vinyl sheets affixed to kitchen cabinets. The operation (less complicated than it looks!) also makes the room larger, since panoramas play with perspectives and give the illusion of distance, just like mirrors.

The couple thus created an airy, inviting home that is unique to them and unlike any other. Just as happiness is not measured in square feet!